I have lived through many ages,

through the eyes of salmon, deer, and wolf.

I have seen the Northmen invading Ireland,

destroying all in search of gold. 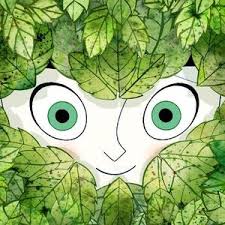 I’ve seen suffering in the darkness.

Yet I have seen beauty thrive in the most fragile of places.

I have seen the book.

-Aisling from The Secret of Kells

In the beginning, there was only nature. We lived alongside her laws and her ways. With the annals of time, humans created civilisation. Without the written word, civilisation wouldn’t exist. And it all began with the scribes – the very first wordsmiths who etched their words so they would never be forgotten or lost.

For us modern folk living in the 21st century, it is hard to imagine a time when the written word didn’t exist.

I spent Saturday night in bed watching The Secret of Kells. Set in 9th century Ireland, the historical narrative of the actual Book of Kells is weaved into the film’s story – which centres around the fictional adventures of a young boy, Brendan, who is brought up in the monastery at Kells.

In the film, Aisling represents nature; and the monastery where the monks reside is civilisation. The two co-exist in an uneasy truce.

My mind takes me back to my trip to Ireland in 2017 – when I had the privilege of seeing the exhibition at Trinity College where The Book of Kells is housed.

Written around 800 CE, the Book of Kells contains a richly decorated copy of the four gospels in Latin. I was deeply moved by the details of the manuscripts. The illustrations, ornamentation and bindings are deeply complex, ornate and extravagant.

Handcrafted typography. Intricate drawings. Gems encrusted into book covers and bindings. I can’t say I’ve ever seen anything like it.

It is a remarkable work of literary art.

Brendan – the brave and curious protagonist of the film that the book inspired – is an apprentice in the scriptorium of a monastery. Scriptorium is a Latin word that means ‘a place of writing’. It is usually associated with the writing of religious books in a monastic context in early in medieval Europe.

It was a definitive time in European literary culture that centred around the copying of the Bible.

The medieval scriptorium conjures up images of light and shadow, with rows of hunched figures stooped over ruled parchment, quill in hand, under the watchful eye of the master… But how accurate is this depiction?

I’ve always been a huge fan of the retellings of folklore, legends and myths. The magic is always in the imagination that went into the retelling of a story that is both familiar, yet fresh.

History, however, often tells a different tale to the stories we come to love.

The ‘scribe’ as a profession did not begin in these monasteries. Rather, it began thousands of years ago in the Near East.

And it all started with The Merchant.

Sumerians first invented writing in 3500-3000 BCE as a means of long-distance communication in trade. This early form of writing was known as cuneiform, impressions made with a sharp object in clay. Pictographs – the use of symbols to represent objects – were the earliest form of cuneiform. It is considered the most significant amongst the many cultural contributions of Sumerians to modern society.

As civilisation grew more complex, the need arose for a more elaborate writing system. Pictographs (known in modern day lingo as icons) gave way to phonograms – symbols which represented sounds. These ancient phonograms are the ancestors of the modern alphabet.

Nisaba – the former Goddess of Grain – became associated with writing as records were made regarding grain transactions. As the Great Lady who made the grain grow, she also oversaw the accounts of where it was distributed and how. As trade grew, Nisaba became synonymous with the written word. She was known as the scribe of the gods and keeper of both divine and mortal accounts.

In the story Dream of Gudea, Nisaba is pictured as a woman holding a gold stylus and studying a clay tablet on which the starry heaven was depicted.

As the written word flourished from accounting to an unimaginable score of uses – scribal schools known as ‘Tablet Houses‘  sprung up in both cities and towns. By 2000 BCE, Sumer boasted a formal school system. Through archaeological discoveries in the former religious capital of Nippur, scholars have even been able to the trace the curriculum that students once followed in scribal schools.

For the first time in human history, school became a necessity.

Most scribes were young men, but evidence reveals that women were scribes as well. The signature of the high priestess Enheduanna, occurs on a number of hymns and poems that encapsulate her personal devotion to the Goddess Inanna. Even 600 years after Enheduanna – women continued to work as scribes.

Fast forward a few thousand years later, and the term ‘scribe’ is typically used to describe a professional copyist before the emergence of the printing press. In the ancient world, however, they were the most learned men and women of their day.

Their stories may be carved in stone – but language is always alive – evolving and changing as we do through the annals of time. Which is why the stories change. Which is why languages die. Which is why despite historical records – the myths continue to grow and morph into new myths that didn’t exist before.

My History of the Written Word

My own journey as an author hasn’t been that different to the stories of ancient civilisation.

In my post The Journey From Bookkeeping to Poetry, I discussed how the very first journal I wrote in was the accounting journal for my family business. As to how that morphed into a need and desire to write about mythology and spirituality – that’s a question I’ve found unexpected answers to – as I discovered the dusty pages of history and found my own story embedded in the long history of human civilisation.

I’ve lost track of the number of people who told me I was crazy to give up a career in accounting to write books and become a teacher. But it seems to be the natural order of things. If anyone berates me on my choice again, I have scrolls and scrolls of ancient history on my side.

I may write metaphysical stories inspired by world mythology, but I fight ignorance with fact.

And it all started with Mother Nature – mankind’s very first teacher.

She has lived through many ages, through the eyes of salmon, deer, and wolf. She has seen the Northmen invading Ireland, destroying all in search of gold. She’s seen suffering in the darkness. Yet she has seen beauty thrive in the most fragile of places.

She has seen the book.

I am Little Light and the whole world will know my stories.

10 thoughts on “History of the Written Word: the scribes of medieval Europe and ancient Mesopotamia”