This is the first book that I read which delved into a story from Jewish texts. Hitherto, my understanding of the Abrahamic religions was that they were monotheistic from the very inception of the religion. But through The Red Tent, I saw a different story, one in which a pantheon of Gods and Goddesses existed alongside a monotheistic belief. 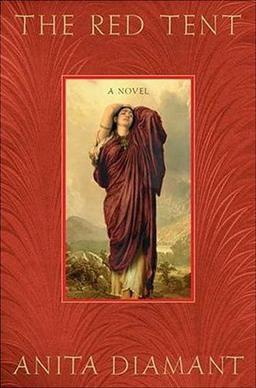 Dinah is born to Jacob after ten sons. Jacob’s four wives, who were also sisters, delighted in her arrival. While the stories of men are often written down, Dinah’s mothers waited for a daughter to pass on their stories.

In a way, Dinah becomes the bearer of their legacy.

Jacob follows the ways of his father and grandfather – but his wives and the other women of the tribe followed their own pantheon. As a result, Dinah’s early life is filled with stories. Stories of her mothers’ lives, stories of childbirth, myths of the Gods and Goddesses honoured by these women: Inanna, Asherah, Dumuzi, Ninhursag, El, Uttu and Gula.

These stories led me down a rabbit-hole of online research on the Mesopotamian and Sumerian Gods. As a nomadic tribe, the people did not live near cities or visit places of worship. Their sacred space was at the bamah – an open-air shrine. Jacob’s wives revered the teraphim, the household Gods of that time. Most activities of great importance were always preceded by an offering to the Asherah, the Mother Goddess.

Their practices bear a striking similarity to current Hindu practices. Hinduism – even today – is filled with many, many Gods and Goddesses. Each one is almost like a Minister of Parliament for His/Her special area. Rain, wealth, health, visas, children, relationships and pretty much every want you can think of – has a special God/Goddess who will fulfil it.

In most Hindu houses of today, there is always a special altar or ‘pooja room’ dedicated to the favourite Gods and Goddesses of that house. No wish is too trivial for a prayer. I remember a time when I earnestly placed the dreaded letter from school, in front of the Gods, praying fervently that they would somehow alter my results. My grandmother still believes that her favourite God Karthikeya, helped her hail a rickshaw when she was stuck outside in a thunderstorm.

It’s hard not develop a relationship with these Gods from childhood, through the stories we hear. Of course, as I grew older, I went through many phases ranging from deep belief to atheism. The pendulum swings wildly over the course of a few years. But the trust I place in Gods at the altar is like a warm steady light in dark times.

Every time I get into my car, the golden Elephant-God Ganesha, beams at me from the dashboard. He is my ‘car Ganesha’, who came along with the brand-new vehicle. I believe that he keeps me and my car safe from accidents. Which is nothing short of a miracle on Indian roads.

I couldn’t help but smile when I read about Leah’s impromptu offering to Goddess Inanna, so that her first meal cooked for Jacob would impress him. Or when she prays to Anath to heal Jacob after he takes ill. When Zilpah teaches Dinah the art of the loom, she weaves in a magical tale of Uttu, the Weaver Goddess.

Dinah’s coming of age is marked by a grand feast and a rite of passage in the Red Tent. The Red Tent referenced in the title is a tent set aside for menstruating women and childbirth. It is during this rite that Dinah dreams of the Goddess who chooses her: Tawaret, the patron Goddess of Childbirth. True to the signs in her dreams, Dinah learns the skills of midwifery from her aunt Rachel and Inna.

As the book progresses, however, many names and rituals are forgotten. Women from other lands join Jacob’s tribe through marriage, but they do not always join in with all the rituals of the Red Tent. Jacob himself grows more intolerant of these customs, especially after Dinah marries the Prince of Shechem without his consent, eventually smashing the teraphim precious to his wives

The tragic events of Dinah’s life take her to Egypt, where she arrives lost and broken in spirit after the loss of her husband and first love. She stays in a shell of pain and emptiness for a long time, but eventually the blessing of Tawaret finds her again through Meryt, an Egyptian midwife. She slowly gains a measure of renown and independence with her skill as a midwife, once more. Eventually, it is this blessing that fills her life with love and laughter again.

Anita Diamant possesses the gift of being able to draw you into another time and place with her style of story-telling. Dinah’s tale will linger with you long after you put down the book.

Vandana Rajendran is a tarot reader and a life-long student of astrology, who loves to let her hair down with a bit of dancing. She is fascinated by mythology of all cultures, especially when it is accompanied by a nice cup of tea. On weekdays, she works for a technology start-up.