Love marriage or arranged marriage? It is a universal debate in the life of an Indian woman. According to various official and unofficial sources, the vast majority of Indian youth are partial to arranged marriage. This means that, even today, young people in India prefer to find a partner through their parents or senior family relatives. The vast majority of Indian women also claim that they did not know their husbands before marriage.

Was there a time when an Indian woman had the right to choose her husband? Could she proclaim her intention to marry in the community and invite eligible suitors to a particular marriage venue on an auspicious date and time?

In Ancient India, the practice of Swayamvara or self-chosen groom was a significant ritual. A young woman of marriageable age, belonging to a noble family, had the right to choose her own spouse in the presence of her parents and family members. The intention of the ritual clearly signifies the ideals of women empowerment in a forgotten age and time. 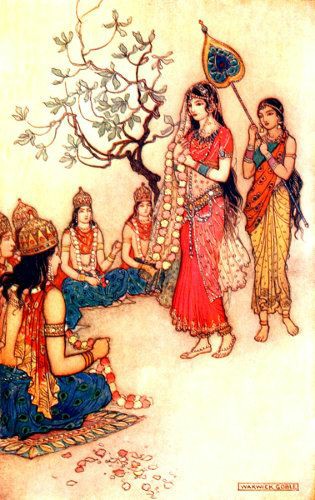 But did the bride really have freedom of choice?

Typically, suitors had to send a kind of curriculum vitae or biodata to the bride-to-be once she had made her intentions clear. It would contain a list of their vital statistics, personal interests, financial status, lineage, reputation and standing in the community. This was probably circulated via word of mouth in those days. Through this information, the bride-to-be and her parents had a fair idea of who to invite for the main ceremony. However, she would only get to see them face-to-face on the day of the ceremony.

The next step was to send a formal invitation, via messenger, to all the selected suitors. As per Vedic tradition, an auspicious date and time for the main ceremony was communicated to all invitees. On the day of the event, the bride could announce her selection directly from the present suitors or she could accept the winner of a pre-arranged competition between the suitors. Either way, it was mandatory for her to garland the man she chose in the venue itself. Finally, a marriage ceremony was conducted in accordance with Vedic austerities.

The most famous Swayamvara is in the great Indian epic The Ramayana. King Janak declared a Swayamvara for his daughter, Sita. He sent a royal invitation to all the princes and kings that were allies to his kingdom.

A test of courage was set up on the day of the ceremony. The suitors were asked to string a sacred bow called the Shiv Dhanush. Lord Rama was the only one of the present company who accomplished the task and won Sita’s hand in marriage.

Other notable Swayamwara ceremonies are found in the great Indian epic The Mahabharata. Kunti chose to garland Pandu, the King of Hastinapura, during her Swayamvara. There was no competition held between the suitors. Draupadi accepts Arjuna as her husband when he wins the archery competition set as a qualifying round in her Swayamvara.

But, despite the obvious ideals of empowerment, is this ritual really in favour of women?

During my research, I came across marked loopholes in the entire process. Firstly, the bride is a young virgin maiden of sixteen or seventeen years of age. She could be even younger. However, the suitors could be of any age between twenty one and fifty. They could have other wives and children as well. Their main eligibility criteria is to be of certain lineage and caste.

Secondly, the conditions of the ritual are tricky. The bride sees the suitors for the very first time on the day of ceremony. She must garland one of the present congregation. If a competition is held, the bride must garland the winner. She is not allowed to reject him under any circumstances, even if she does not happen to like him. Obviously, she cannot marry a man she loves through this ceremony. More often than not, her choice is influenced by her family’s preference.

In The Mahabharata, during Rukmini’s Swayamvara, her brother, Rukmi, refused to invite Lord Krishna and ordered her to garland Shishupala, his best friend. Due to Rukmi’s political ambitions, the entire congregation of suitors arrived with the predisposed notion that Rukmini would marry Shishupala on that day. Rukmini was not given the freedom of choice.

Another interesting loophole in the Swayamvara of an Indian Princess is that the majority of suitors were powerful personages with financial and military strength. The marriage would result in a strategic and administrative alliance between the kingdoms of the bride and the groom. This meant that the princess bride was more like a hostage than a wife to the groom. Kunti’s marriage to Pandu was an alliance through Swayamvara between their two kingdoms.

The competition or challenge was supposed to be fair for all participating suitors. However, it was not governed by any set rules. Instead, it was left to the better judgement of the bride’s family. Usually, it emphasised the importance of strength rather than intellect in discerning an ideal match for the bride. There was no way of judging the suitor’s inherent personality or character.

There are also instances where the men exploited the loopholes in the Swayamvara ritual for their own benefit. In The Mahabharata, Bhishma, the patriarch of Hastinapura, was enraged to learn that the King of Kashi had not invited his younger brother Vichitraveerya for the Swayamvara of his three daughters.

On the day of the ceremony, he arrived alone and declared his claim on the princesses on behalf of his brother. He argued with the present suitors that he did not need to prove himself to be the strongest. None could dare to oppose him or fight him head on. Then, Bhishma forcibly carried off the three young maidens from their Swayamvara arena, much to the dismay of their father and the entire congregation.

How did Swayamvara begin?

The origins of the Swayamvara ritual are not clear. It is debated that the earliest record was the Swayamvara of Sati, daughter of Daksha. She chose Lord Shiva as her husband in the presence of her family and celestial beings.

In The Mahabharata, the Swayamvara of Damayanti, Princess of Vidarbha, is also the earliest known instance where multiple suitors were invited for the ceremony. Damayanti chose the mortal Nala, rejecting even the gods who were present in the assembly.

Research shows that women’s empowerment was a common concept in Ancient India. The Vedas mention several other practices apart from the Swayamvara that echo this sentiment in the fields of education, arts, music and even warfare. Eight forms of marriage were recognised in ancient Hindu society. Majority of these have been lost due to the influence of foreign invasions post the Vedic period. It is suspected that the sanctity of the Swayamvara ritual was also lost due to similar reasons.

No doubt the ritual gives more control to the woman in finding a suitable partner than the arranged marriage protocols of modern times. Regrettably, it also takes away any chance the woman might have to choose a partner who she truly loves.

C.Phillip is an entrepreneur and author based in Mumbai. Her debut novel, The Last Nautch Girl is an action-packed historical romance. For the most part of her life, she worked abroad and traveled extensively. Through that journey, she met a lot of wonderful people in different countries. When she is not working at her entrepreneurial venture or spending time with her cat at home, she likes to write action-packed historical fiction with strong women protagonists.