As a traveller on life’s journey, I have a wish list of places I’d like to visit in my lifetime. One of the countries that’s on my wish list is Kyrgyzstan–a landlocked country in Central Asia. I’m not one for all talk and no action. I have tried planning a trip there numerous times over the past several years, but somehow or another, it doesn’t seem to pan out. 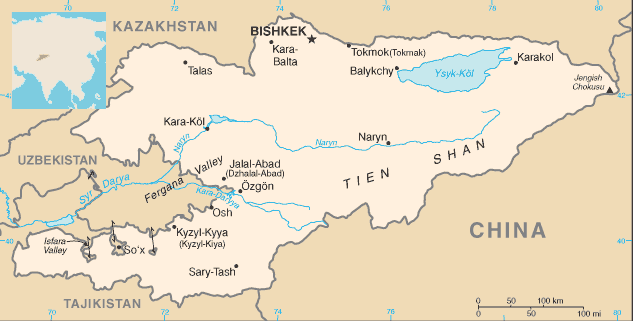 With the current COVID-19 pandemic that has the world on lockdown, many of us are unsure of when we will ever be able to travel again. In the interim, we always have stories of fellow travellers such as ourselves to regale us with stories of the places they come from so that we can make the journey from the comfort of our homes. Some time back, I was fortunate to cross paths with Azamat in Japan. He left Kyrgyzstan some 11 years ago and is currently residing in Tokyo. I hope his stories bring you as much joy as they brought me.

Dipa: Ancient peoples all over the world venerated and respected ‘Mother Earth’. Tell us about the relationship that the ancient nomads of Kyrgyzstan had with the land.

Azamat: This question reminds me of my childhood. I grew up in a small village of less than a thousand people. Every spring—sometime between late April to early May—each village would take part in the same ritual, but each street would do it on its own. All the neighbours from each street would get together and go to a nearby river.

We used to do this ritual where we sacrifice a sheep or a goat—my assumption is that it’s from Islamic traditions. Before we adopted Islam in Kyrgyzstan, we believed in Tengrism and these two co-existed for several centuries. After the sacrifice, we would pray and celebrate. We pray to the sky and nature to bring more rain during the year. We’re farmers and some are nomads and rain is the source of life. This ritual is done so we can have a good harvest in autumn and survive the winter. We can have grasslands for our livestock so they can survive the winter.

Dipa: Tengrism combines animism with shamanism and ancestral veneration. In Central Asia, many people still tie ribbons to trees in places they believe are sacred, or burn herbs in their homes to ward off bad spirits. According to statistics, there are some 50,000 followers in Kyrgyzstan today. What are your personal experiences with this belief system?

Azamat: Back in my village–it’s funny if I think back about those days–we were under Russia for almost a hundred years. They tried to eliminate Islam and Tengrism from our culture—but we continued these traditions.

In my village, we had these sacred lonely trees. Whoever was going through my village or a neighbouring village, would tear off a piece of their clothing and hang it on the branches. There was a belief that these trees were sacred and had their own spirit. They believed that by performing this ritual it gave them some kind of protection.

There were sacred stones in mountains, too. People used to believe in the river—and water—as the main source of life. There were sacred springs. We don’t know the origin of the spring, but people believed that it was a sacred place.

Historically, Kyrgyzstan was a tribal society and each tribe’s origin was based on an animal. There is a legend that a deer saved a child. There is a tribe called Bugu Ene—which means mother deer—and to this tribe, deers were sacred animals. There were legends and stories related to that.

In my village, people believe in the spirit and the soul deeply—even now. Every time I visit my village, we go and pray at the graveyards—each village has one that is a kilometre away from the village. We pray for my immediate family and for everyone in the graveyard to Rest In Peace. Even when I talk to my relatives now, they believe that our ancestors visit them. It is a part of Islam, too. During Ramadan and Kurban Bairam, we prepare traditional foods and dedicate it to the souls of the ancestors.

We humanise the spirits. The spirits are still with us. They are somewhere floating around us. They need food, water, salt. We need to be respectful and provide them with food. During Islamic holidays, it is strictly prohibited to drink any alcohol or offend somebody as spirits don’t like it. People strongly believe in that.

Dipa: What was the role of the shaman for the ancient nomads of the steppes of Central Asia? What’s their role in modern society?

Azamat: During early 1990s, when I was small, we got our independence and our country was kind of lost in what to believe—communism collapsed and Islam was lost. There was a return to Tengrism, Islam and Shamanism.

During those years, there were belief systems that brought the three belief systems together. There were people who came to our town to proselytise. They would read Arabic prayers that the locals didn’t understand. They would use different artefacts to back up their prayers—amulets, stones, the fur of a sacred bird—and give it to you and say, ‘Now you are protected’. Part of it is shamanistic—they close their eyes, loose themselves and start chanting. Together they would pray and chant for hours sometimes.

I’m not sure which culture it belongs to—I think it might be people coming up with their own ways. People would go to their sacred tree to pray further. I heard stories that people would cry when they went around the sacred trees. We pray for nature, we pray for spirits as well as use prayers from the Quran. My answers are based on a specific chunk of time. I’m not sure if people still do this.

Dipa: As populations become more educated, they are abandoning folk customs and ancient traditions that survived for thousands of years. People have modern comforts that our ancestors may not have yet—yet they seem lost and searching. What are your thoughts on this shift?

Azamat: I think people in Kyrgyzstan still haven’t faced that modernisation that other countries are going through. 60% of the population are still farmers and still follow the traditions that they came before. They’re following the three pre-existing traditions. I haven’t heard any big discontent with the modern life yet.

On the one hand, we want personal growth, development and education and be part of this global society—which gives you a certain kind of satisfaction that you’re learning and growing as a person and living in a global culture. At the same time, I miss the rural areas where you have quietness and personal connection with people—they are not random workers—you are very well-connected. You have a community. The proper social life. In cities, you are lost.

I can’t say that this is good, this is bad. It’s a chicken and egg problem. Maybe we can try to balance it—spend sometime in the city, detox and come back, but that’s a different challenge.

2 thoughts on “The Soul of the Land | Stories from Kyrgyzstan”